The PPP Guide, a free downloadable resource to help candidates prepare for the PPP Certification Program, has been fully translated to Chinese. Chapter 6: Tendering and Awarding the contract, Chapter 7: Strategy, Delivery and Commissioning and Chapter 8: Operation and Feedback are the final chapters to be translated making the PPP Guide fully available in Chinese.
The vision of the APMG Certification Program and PPP Guide is to foster a common minimum level of knowledge and understanding, plus provide certification for practitioners engaged in PPPs.
The PPP Certification Program comprises three examinations: Foundation, Preparation and Execution. The Foundation and Preparation exams are already available to sit in the Chinese language and work is underway to translate the Execution exam.
Fatouma Toure Ibrahima, Manager of the Infrastructure Programs and Analytics unit of the World Bank, said, “With this Chinese translation, the PPP Certification Program is now available in eight languages, addressing the growing need for high-quality knowledge-sharing about PPPs. In particular, the launch of Chinese version is a significant milestone: this is the first time the complete PPP Guide and all three exams have been translated into a non-English language, expanding the outreach to China and other countries in Asia.
We’re very proud to provide the leading training program that strengthens global capacity to design and implement sustainable PPPs. Countries around the world need more resources to build modern, reliable infrastructure to meet their citizens’ needs—and reach climate change goals. Part of this puzzle is ramping up the private sector’s involvement, responsibly.”
"The Institution of Public Private Partnerships is to promote exchange of PPPs knowledge for the Belt and Road Initiative and the PPPs market in China for which it is gaining ground since 2014. We found the World Bank Group’s PPP Certification Program CP3P can substantially provide the PPP practitioners with the Body of Knowledge of PPPs underlying principles and invaluable experience in the delivery of PPP projects worldwide”, said Walter Chan, Chairman, The Institution of Public Private Partnerships.
“We believe the members of the Institution can benefit from participating the PPP Certification Program CP3P to attain a proper level of PPPs knowledge and understanding. With this inspiration in mind, the Institution of Public Private Partnerships was determined to translate the PPP Program Guide into Chinese to share the PPPs knowledge for the members and the PPP practitioners in China. We hope the PPP Certification Program CP3P in China will be the definitive credential to demonstrate to the peers in the world that the participant’s abilities are aligned with international PPP good practice," Chan says.
“Over 4250 exams have been sat and feedback from candidates has been overwhelmingly positive. There has been specific interest in the certification program from China, which is a global leader in PPPs. The Chinese translations are intended to support all Chinese PPP practitioners and those working in PPPs such as lawyers, advisors or those who would like to pursue a career in PPPs. Becoming CP3P demonstrates to peers and employers that you have specialist knowledge,” says Richard Pharro, CEO, APM Group.
Since the launch of the PPP Certification Program in English, the PPP Guide has also been translated into Spanish, French, Portuguese, Japanese, Russian and Serbian.
To access chapters of the PPP Guide in Chinese, click here: https://ppp-certification.com/chinese-ppp-guide
About the PPP Guide
The PPP Certification Guide is an innovation of the Asian Development Bank (ADB), the European Bank for Reconstruction and Development (EBRD), the Inter-American Development Bank (IDB), the Islamic Development Bank (IsDB), the World Bank Group (WBG) and part funded by the Public-Private Infrastructure Advisory Facility (PPIAF) with a shared vision of enhancing PPP performance globally.
Since the inauguration of the scheme in June 2017 over 4000 candidates from 125 countries have taken an APMG PPP Certification Program exam. One of the main goals of the program is to share best practice knowledge and make it freely available to everyone. The PPP guide is now available in eight languages to make it accessible to even more PPP practitioners.
Over 1 million visitors have downloaded or accessed the PPP Guide online, which uses principles and models to convey knowledge across a range of subjects including planning and funding, tendering, contracts, operating and maintaining projects.
The PPP Guide covers the following chapters that form part of the process to attaining the credential. 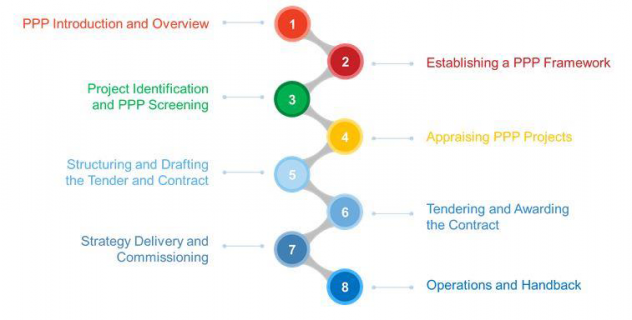 More details on the PPP Guide are available from https://ppp-certification.com/media/news/2019/october/ppp-guide-translated-chinese